Sandra Occhipinti has worked in government, academia and industry. She currently holds the position of Research Director of the Discovery Program (Mineral Resources) at CSIRO. Sandra formerly specialised in Mineral Systems science at the Centre of Exploration Targeting/School of Earth Sciences at UWA, with projects in both Western Australia and South America. Sandra is the current Chairman of Geoconferences (WA) and has been an active committee member for over 15 years. Nicolas Thebaud's research focused on tectonic processes, their petrological and geochemical impacts, and their control on the formation of ore deposits. During his Ph.D (2002-2006), Thebaud's conducted competitive and interdisciplinary research to characterise and model the geometry and hydrodynamics of a Mesoarchean plumbing system in the Pilbara, to constrain the scale and magnitude of fluid circulations, their relationships with Archaean crustal geodynamics and their impact on the formation of ore deposits. In October 2007 Thebaud became Research Fellow within the Centre for Exploration Targeting, School for the Earth and Environment, the University of Western Australia. He has, since then focus his work on the tectonostratigraphic reconstructions of key 2.7 and 2.9 Ga nickel and Au systems in the Yilgarn Craton using a GIS integrated geological, (U-Pb SHRIMP geochronology and Hf-isotopic geochemistry) and geophysical approach combined with 3D and 4D digital modelling. Graham Begg has over 30 years in the mining and minerals exploration sector, and a PhD in tectonics and epithermal deposit geology from Monash University. Since 2002 he has also spearheaded collaborative research at Macquarie University, aimed at systematic multi-disciplinary mapping of the architecture and geodynamic evolution of the continental lithospheric mantle and crust, with the aim to facilitate a breakthrough in greenfields exploration discovery. The outputs contribute towards the commercial Global Lithospheric Architecture Mapping (GLAM) product, a framework for area selection in the resource sector marketed by his consultancy Minerals Targeting International (MTI). Dr Klaus Gessner is managing the 3D Geoscience Branch at the Geological Survey of Western Australia, and is an Adjunct Senior Research Fellow at the School of Earth Sciences, UWA. Klaus’ main research interest is understanding tectonic processes that shaped Archean and modern orogens and the ore-forming processes within them. Dr. Linda Iaccheri is a Researcher at the Wits Isotope Geochemistry Laboratory. She is interested in isotope geochemistry, magmatic processes and the evolution of the continental crust. Dr. Weronika Gorczyk is a research fellow at Centre for Exploration Targeting, School of Earth Sciences, the University of Western Australia, Investigator of ARC Centre of Excellence for Core to Crust Fluid Systems (CCFS). She is a geodynamicist who looks at lithosphere-crust interaction at different tectonic settings. Mark D. Lindsay completed his PhD at Monash University and Université Paul Sabatier (Toulouse III) in 2013. Mark is a Research Fellow at the Centre for Exploration Targeting, University of Western Australia and specialises in integrated geological, geophysical and 3D modelling and understanding their interrelated uncertainties. Mark's other research interests include investigating relationships between geodynamic evolution, tectonics and mineral systems in Archean and Proterozoic terranes. Tim Johnson is a Senior Lecturer at the School of Earth and Planetary Sciences, Curtin University. He is a field and metamorphic geologist with expertise in phase equilibria modelling and the generation, segregation and migration of melt in the lithosphere. He is particularly interested in the geodynamics of the early Earth and the genesis and modification of Earth's first stable continental crust. Dr Helen McFarlane is a structural geologist and Research Scientist within the Multidimensional Geoscience Group in CSIRO Mineral Resources. She is currently involved in a wide range of projects within the Discovery Program, looking at structural controls in mineral systems hosted in Proterozoic and Archean terranes of Australia, spanning Au, Cu, Ni and base metal mineralisation. She received her PhD from both Monash University (AUSTRALIA) and the University of Toulouse (FRANCE) in 2018 before completing two post-doctoral placements at the University of Western Australia within the School of Earth Sciences/Centre for Exploration Targeting (CET). Helen’s previous experience involved both regional and mine-scale structural studies in West Africa and South America, coupled with multi-disciplinary, multi-scale studies incorporating metamorphic, isotopic, geochemical and potential field geophysical data. Margaux has been working with CSIRO as a research scientist specialised in mineral exploration, and more specifically in magmatic deposits (Ni, Cu) since March 2017. She is Team Leader for the Hydrothermal Footprint Team. Before this, she did a 3-year Post-doc at CSIRO, focused on understanding of the physical processes related to the genesis of magmatic nickel sulphide deposits. She previously studied at the following institutions: PhD at the University of Western Australia - Hydrothermal footprints around magmatic nickel sulphide deposits, Masters of science at Lulea University of Technology (Sweden) - Mineral Exploration Engineer degree from the ENSG (Ecole Nationale Superieure de Geologie) in Nancy, France, and Bachelor in Science from the National Polytechnic Institute of Lorraine. Dr Graeme Broadbent worked for a long time as an exploration geologist for Rio Tinto Exploration before his retirement in 2018. He has looked in many geological environments for many commodities including gold, iron ore, copper, lead, zinc, diamonds, coal and aluminium. The Archean underpins everything.

Daniel Wiemer is a postdoctoral researcher and part-time lecturer at the Centre for Exploration Targeting, School of Earth Sciences, University of Western Australia, since 2017. He received a M.Sc. degree from the Christian-Albrechts University, Kiel, Germany (2012), and a Ph.D. degree from the Queensland University of Technology, Brisbane, Australia (2017), for which he received an Outstanding Doctoral Thesis Award. His expertise includes field-based structural geology, petrology, geochemistry, and geochronology. Daniel’s research focuses on crustal evolution, multi-scale geodynamic processes, mineral system formation, and tectonic modes throughout Earth’s history. His research on the Australian East Pilbara Terrane has contributed to advances in understanding timescales and processes associated with Early Archean pre-plate tectonics. 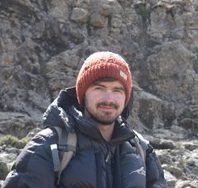 Michael Hartnady is a postdoctoral researcher in the Timescales of Mineral Systems Group, School of Earth and Planetary Sciences, Curtin University. He received a M.Sc. degree from the University of Cape Town, South Africa (2014), and a Ph.D. degree from the Curtin University in 2020. His expertise includes field mapping, structural geology, metamorphic petrology and isotope geochemistry. His research focuses on the role of fluids in deformation, crustal differentiation, and mineralisation process within Earth’s crust. He is particularly interested in better understanding the geologic water cycle in the Early Earth.